The daily Stockholm newspaper.
Dagens Nyheter Oct 14 2008 edition, concluded that Stan Getz was partly to blame for the financial crisis now plaguing the world. The reason: After an article in the New York Times
"Taking a hard new look at a Greenspan legacy"

The Swedish paper concluded that things might have been different had Greenspan pursued a musical career. 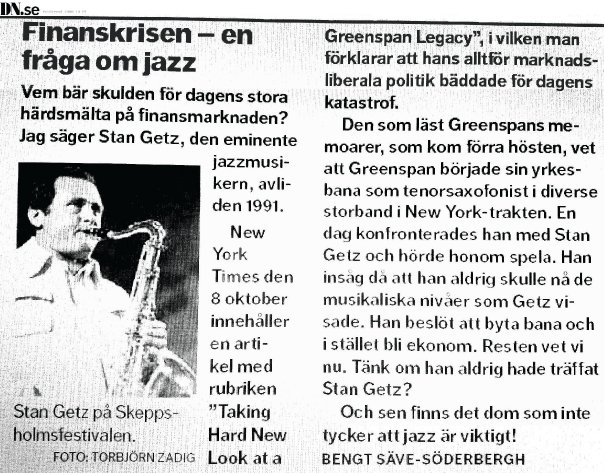 The Newspaper Dagens Nyheter (Sweden) Oct. 14th 2008 - Translated in to English:
THE FINANCIAL CRISIS – A QUESTION ABOUT JAZZ
Who’s to blame for the financial crisis?
I would say Stan Getz, the eminent jazz musician who died 1991.
New York Times October 8th is saying in an article with the heading “Taking Hard New Look at a Greenspan Legacy”, in which one’s explaining why his far too liberal marked politics made room for today’s catastrophe.
People who have read the memoirs of Greenspan published last autumn, knows that Greenspan started his professional career in various Big Bands in the New York area. One day he had to sit next to Stan Getz and he heard him play. He then realized that he would never achieve the musical level Getz already was on. He decided to change course and become an economist in stead. The rest of the story we all know
What if he never met Stan Getz?
AN EVEN NOW THERE ARE STILL PEOPLE WHO DON'T BELIEVE JAZZ IS IMPORTANT!
Bengt Säve-Söderbergh
http://www.pressdisplay.com/pressdisplay/viewer.aspx

Turning to music and baseball

ALAN GREENSPAN: Then, I decided that baseball was my thing. And I was actually getting very good, but at the age of 14, I hit a plateau and I never improved.

JIM LEHRER: You were a left-hander, first baseman, right?

ALAN GREENSPAN: I was a left-handed first baseman. I hit the ball pretty well. Then, I got into music, and I became a professional musician for a couple of years.

JIM LEHRER: Which one did you enjoy the most?

ALAN GREENSPAN: I actually enjoyed the clarinet the best, but I was a fairly good amateur, but a moderate professional. But what really did me in is I had, as an amateur, had to play next to Stan Getz. I was 16; he was 15. I decided, "Do I really want to be in this business?"

JIM LEHRER: Why, because he was so good?

JIM LEHRER: Was he really good?

ALAN GREENSPAN: And he was one of the really historic famous sax players. And the best economic decision I ever made in my life was to decide to leave the music business and go into economics.

Comment by Hilde Hefte on November 8, 2008 at 10:23am
GREAT it's here too!!!!
I just love this one!!!!!!
AN EVEN NOW THERE ARE STILL PEOPLE WHO DON'T BELIEVE JAZZ IS IMPORTANT! hehehehehe
I put it on my myspace blog too, and added what I was listening to: Stan Getz & Oscar Peterson Trio "THE SILVER COLLECTION" LOL.
XOXOXO

Comment by Denis Ouellet on November 8, 2008 at 11:24am
Thanks for the translation Hilde.
Such a funny story. I wonder what Greenspan would say now ???
Thanks for posting it Bev.

Comment by Hilde Hefte on November 8, 2008 at 6:30pm
Well Denis, there wouldn't have been anything for me to translate if it hadn't been for you and Bev in the first place.
:-))))

Comment by THEO URFF on November 13, 2008 at 12:20pm
whitout jazz the world would already be in an ice age......listen to the great soundtrack of the french film "mort du`n pourri" ( DEAD OF A CORRUPT COP) whit the great Alain Delon...and of course the music from Stan GETZ....watch the beautiful scene in the beginning of the film when Stan takes up the horn and begins to play...AND THEN THE LONDON SYMPHONY ORCH. FALLS IN....AS GOOD AS FOCUS.... THEO URFF

Comment by Dwight W. Hayes on January 25, 2009 at 8:06pm
HaHa! That is reaching for a straw to say," Stan caused-to blame- for the world financial crisis, because ALAN GREENSPAN could have sooner or later made the discovery about his weak music ability without Stan. Stan was an indirect cause. Therefore, to say, Stan was the causal factor is a leap...LOL But the idea is funny. Thanks for posting it anyway.